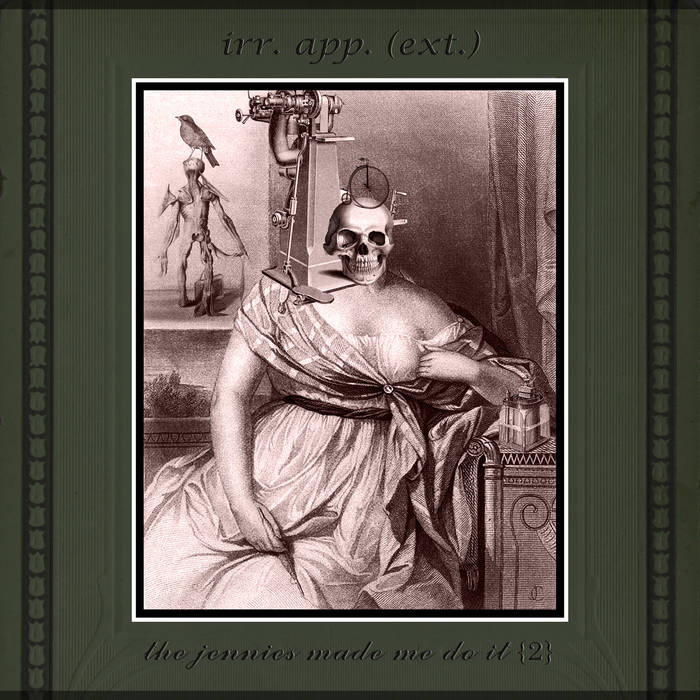 The second volume of tracks collected from split releases with At Jennie Richie and other AJR-organised projects.

4. The Toad Came To Meet Me At The Airport, And In His Head He Carried A Golden Meteorite Resonating With The Voices Of Long-Extinct Birds {2013}

track 1 was created as a finale to At Jennie Richie’s ‘Les Applications De La 'Pataphysique’ EP, which was originally intended as one side of a split cassette with Red Squirrels that was ultimately abandoned, and later used as side B of AJR’s ‘The Communist’s Garden Expanded’ c30, released by ReadyMades Tapes in 2014 in an edition of 25 [RT-QS'93021]. Modified extracts from each of the AJR tracks were used as source material.

tracks 2 & 9 were contributed to the AJR-curated ‘Cascades Of The Absurd: A Pacific Northwest Compilation Of Out There Acts I-V And Sometimes Puppet Shows’ compilation c21, released by Dead Accents in an edition of 60 [DA 082]. The ‘Purge’ section of Track 2 includes sources recorded by Lara Miranda and ends with an extract from a performance by the Ossington Plank Ensemble (W. A. Davison, S. L. Higgins, G. Scharpen, S. Stapleton, M. S. Waldron) in June 2004; track 9 features the bowling skills of S., L., L. & D. Stapleton.

tracks 3 & 8 were contributed to the Cameron Michael Nichols-Rage ‘Let’s Play’ compilation CD, curated by Wm Rage and released by ReadyMades Tapes in an edition of 500 [RT-QS’93023/cam001]. Each track utilised the dynamic drum stylings and chirpy voice of CMNR as recorded by Wm Rage. Track 3 was originally credited to ‘7CV’, but is actually an irr. track: when the 7CV project materialises, it will use a completely different method of composing & performing.

track 4 was contributed to the AJR-curated ‘Readymades Compilation Of Arrangements: Qualities Act VII–IX’ compilation c09, released by ReadyMades Tapes in an edition of 50 [RT-QS’93020/va001].

track 5 is the initial attempt at ‘D-DDTTFIMBY’, the one fully-irr. track contributed to the irr/BSBC/TNB collaborative album ‘DDTTNBX’, which was eventually released on CD by Phage Tapes in 2016 [PT:234]. I’d assembled a version of the album in 2012, but decided to rework most of the material just before the 2016 release, and this track in particular underwent some significant alterations.

track 6 was a submission to the Nine Day Antler Society on Valentine’s Day 2013. The track was built from an acoustic guitar sketch recorded by At Jennie Richie, which was chopped up, tweaked around, arranged into a basic song structure, and then layered over with the other instruments & sounds. Vocal contributions from Eriijk Rêssler and Cameron Michael Nichols-Rage were also incorporated.

tracks 7 & 10 were contributed to the AJR-curated ‘ReadyMade Mondo Anthem!’ compilation c80, released by Black Horizons in an edition of 100 copies [BH-106]. Inspired by true events.

track 11 was a collaborative project initiated by AJR in 2011. The Jennies sent me the drum machine part combined with some drones in the first section and asked me to add a bass line; what I came up with did not fit the AJR strategy for the track, however, and the project went no further. Eight years later, I’ve re-listened to my bass part and decided it has some degree of merit, so I’ve added in some more sounds & atmospheres and created my own presentation of the material.

Sights and sounds by M. S. Waldron (except as indicated).
All materials © 2019. These selections were undertaken at the instigation of At Jennie Richie and its satellite organisations between 2011 and 2016.

All tracks exhumed, re-evaluated, drizzled in fabulous sauce and remastered at Rock Creek Tributary, Hillsboro, OR in December 2019.