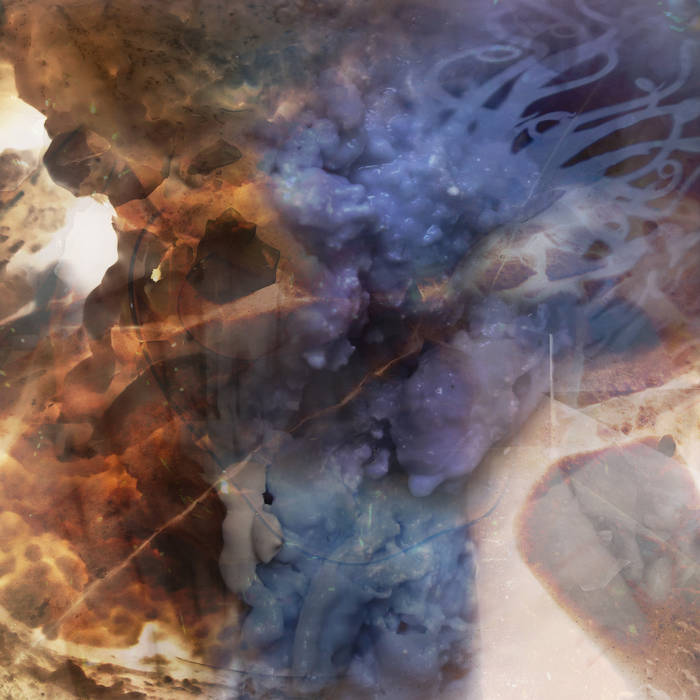 The carcass of a thrush is held delicately suspended between two points jutting up from a calcite outcrop. Rain and frost have matted the feathers together into a dense, unruly mass, while its proximity to the calcite has caused the entire body to develop a brittle mineral crust, giving it an appearance that no longer quite resembles anything distinctly animal or mineral in nature. As the seasons pass, filaments of milkweed and other drifting seeds become trapped in the tangle of materials, abstracting the bird's form even further. Foraging animals and, frequently, other birds come near to the carcass, but are completely unaware of it's nature. Time passes, its shadow lengthens and shortens, yet only becomes progressively more abstruse in its outlines.

An immense, reddish deposit of iron, having gradually been exposed to the air through centuries of erosion, finally loses enough of the grip that was keeping it fixed within the surrounding rock to allow it to follow the urgings of gravity and pull itself free. It cleaves through the bracken and growth, creating a deep, sharp furrow in the ground as it goes, before finally plunging into the dark waters of the tarn below. Here, the individual iron atoms can continue their path towards complete liberation from aggregated bulk. From the furrow left by its passing, a rich greenish-black oil wells up and seeps into the surrounding vegetation, unobstructed now from pursuing its own liberated course.

In a sink in a second-storey bathroom positioned between a chemical storage room and a perpetually noisy walk-in refrigerator, a new and unique form of life has arrived. A previously unknown species of equivocally terrestrial flatworm is emerging from a crack between the porcelain and the metal drain ring, it's sightless, blue-striped head continually probing the surfaces and the air surrounding it. Barely audible above the constant buzzing of the refrigerator, it emits a peculiar, oscillating whistle: an utterance that is being made in the world for the very first time.

Inside the uppermost of three empty storage tanks kept in the yard of an unaffiliated cod oil processing facility, a congregation of feral cats begin to trill like electric toothbrushes -- a sound that they have frequently heard while investigating nearby housing units.

Locked within a Narrenturm specimen closet, a two-headed pig foetus suspended in a jar of formaldehyde has long been left to languish behind a crowd of other jars of other pathological anomalies. Unexpectedly, it's rectum emits a single, immaculate bubble of air. Within the bubble is a tiny, vividly-coloured gnat, covered in minute hairs of sparkling emerald, vermilion and turquoise. The gnat buzzes about excitedly in a tight spiral, exultant to have been freed from its dreary prison.

In a fit of pique, an excitable laundromat attendant has thrown a simmering pot of polenta across his kitchen and out through an open window. The pot plummets down onto the roof of an illegally-parked postal delivery truck, leaving an imprint that almost exactly resembles a human footprint with six toes next to the hoofprint of a pygmy goat. Once sufficiently cooled, the polenta will be eaten by crows.

Over a period of several months, the vents of an apartment air-conditioning unit have been becoming progressively more clogged with airborne clumps of bright orange and red algae. The device's motor has developed a pattern of shuddering and stalling before re-asserting its proper mode of operation. This malfunction will increase in severity until the motor fails completely at the conclusion of another five weeks.

Unknown to the apartment's residents, particles of the algae have also been accumulating within their lungs -- the ultimate consequence of which has yet to demonstrate itself, although many of the tenants have already begun to notice the appearance of an orangish tint to their nails and cuticles.


All sights & sounds © M. S. Waldron, with imagery assistance and inspiration from Ms. T / bleakimagery and audio influence from R K Faulhaber. Copious thanks to them both.