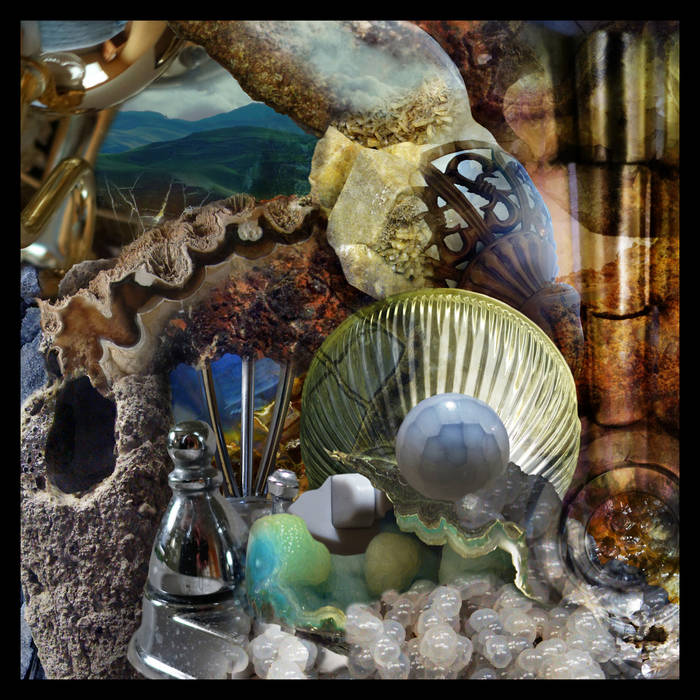 The long-spent vigour of precipitation across previous centuries continues to resonate within deep, weather-carved cavities of basalt, expressing itself now in surface texture rather than sound and motion.

A cluster of vertically-oriented tynes, unevenly attenuated at both ends, drift in unison across a dessicated heath -- entirely out of reach, but close enough that the breeze of their passing can be felt.

Two pox-ridden hands clutch each other in desperation, unaware that the approaching flood of calcium-rich slurry is about to carry them to safety, as well as provide a beneficial antiseptic salve.

Animal teeth clack dully in a pit filled with pumice fragments, most of which are fashioned into shapes that resemble popular breakfast cereals from the 1970s.

The drifting tynes spontaneously configure themselves into a mechanism that continually recycles the same narrow parcel of information that codifies the act of its initial configuration.

A dense cloud of wiry, cotton-like fragments descends from the sky just as a mist of oily condensation is rising from the earth; where the two factions meet marks the elevation at which the impending conflict will ensue.

Surrounded by a preponderance of irritants, a wandering Ysbryda, strategically lacking a sinus cavity, is liberated from the necessity to sneeze.

The empty molt of a cockroach, no longer having agency but still possessing an inclination towards mischief, soundlessly drifts into the coat pocket of a passerby.

What had seemed like the screech of a squirrel challenging an invasion of its territory is revealed to be the squeak of a rubber boot-sole upon roof slates, as an inept burglar attempts to gain entry to an uninhabited house through a chimney that has long been bricked up.

Fear clings to the unwary like a famished barnacle.

Various mutually-antagonistic mobs pass within inches of one another in the dark, but are too preoccupied with their own private grievances to notice.

Membranes of dust, undisturbed for decades, finally crack under the stress of anticipation.

A final glint of failing starlight falls upon the underbrush in a convulsive spattering of enthusiasm.

Waves of melancholy from a quiet town temporarily disrupt the air density of the surrounding area, which causes the clicking sonar of local bats to convey misleading coordinates. For the duration of this condition, the bats softly collide with one another over the outlying lakes and meadows.

A dark, vaguely spherical mass emerges from behind a shed, but evaporates almost immediately, leaving behind a faint sulphur-and-cardamon odour.

Dietary sabotage induces some peoples’ humeri to grow unmanageably long, while their femurs grow inconveniently short; this makes it impossible for them to scratch their backsides, which is in fact a much more serious inconvenience than it may at first appear. Some of these people resort to dragging themselves around on the floor in a sitting position, in the manner of a dog that is afflicted with intestinal worms.

Wandering acquaintances whisper insults at one another in the gloom, but the general ambience lends a quality of tenderness and intimacy to these acts, regardless of what their actual intent might be.

Unsupportably asserted in November 2020, at and around Rock Creek Tributary, Hillsboro.

Initiated by a meandring microphone, but subsequently meandered in a different direction after the feedback started.