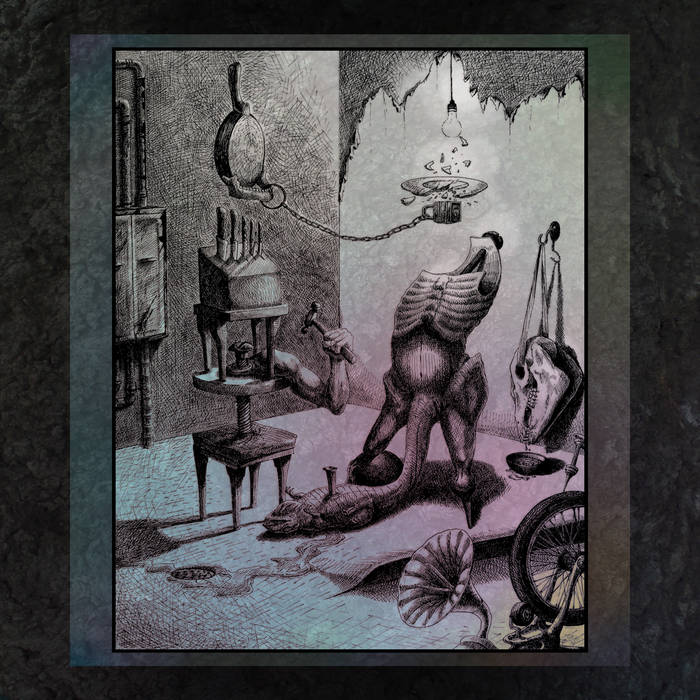 This is volume 1 in the presentation of archive pieces from the early, mostly private stages of irr. app. (ext.)'s development prior to the release of the first album 'An Uncertain Animal...' in 1997. Several more volumes are planned, and will be released as the slow process of compiling and restoration allows.

This collection culls from the second of three developmental stages, which was mostly undertaken through the resources provided by De Anza College's electronic music studio between the years 1991 and 1995.

This was the first extended piece that was attempted during the second stage of prehistoric irr. development (between 1991 and 1995) that I regarded as having an essentially successful outcome. In the previous stage of recording (1988-90), I had access to nothing more than a 'boom box' with dual cassette decks and a dubbing microphone jack; I'm sure the limitations of working this way are obvious enough. I couldn't afford any better equipment at the time, so I had to resort to enrollment in the local community college's electronic music course in order to have access to a half-decent music studio.

Most of the instruments in the studio were the typical, awful-sounding keyboards that permeated the late 1980s (like the mostly-useless DX-7 -- although, to be fair, R K Faulhaber used to get great results from instruments like that; I simply didn't have his finesse). Fortunately, there was a decent sampling system (for the time, anyway) on hand as well, so I had something I could work with to try to create the kinds of sounds I wanted. But this also prevented me from ever using most of the tracks that I initially came up with: I didn't have the resources to supply my own original sound sources, which meant that I had to sample whatever commercial recordings were available to me, and I was always concerned that some of these sources might be too obvious. By the time I put together this track, however, I'd become much more adept at manipulating the samples so that their origins were better disguised. Knowledgeable listeners might still be able to identify some of them. Hopefully not.

The only means I had of making a permanent record for myself of any of the material created during this period was to bring in a cassette deck (borrowed from Mr. Faulhaber) and plug into it using the outputs intended for the studio monitors. A persistent buzz was almost always added to the recordings because this set-up did not allow for proper grounding. From time to time the studio equipment would be upgraded, and whenever that happened the whole internal configuration would be changed, removing the possibility of ever re-creating (and re-recording) the original track -- so buzzing cassette recordings were typically the final and absolute document that I was left with.

Despite all these shortcomings, I did manage to get what I felt were useful results in the last few semesters of my enrollment. Some of these tracks eventually found their way, intact, onto irr. albums: 'Harpsichord A-Go-Go', 'Significant Memory...' and 'Lingual Milk Salts' from the first album 'An Uncertain Animal...' (1997); 'Disjecta Membra' from the 'Dust Pincher Appliances' 10" (1998); 'The Unconscious Passenger' from the still-unreleased 'Foreign Matter, Nor Frequency Carrier' (1999); and '...Fanfare For Nothing In Particular' from 'Their Little Bones...' (1999). Several others, like 'Nihl Corpus', were dissected into smaller pieces and scattered about into various new tracks. An elbow or a toe, and occasionally an entire buttock from 'Corpus' can be found in: 'A Condensed Model' and 'Lines Of Thought, Corrupted' from 'An Uncertain Animal...'; and 'The Absence Of Gravity', 'A Confluence Of Trivialities' and 'From Out Of The Loins Of Pestilence: Joy' from 'Their Little Bones...'.

This is the first time it's been possible for me to give the material from this period a proper scrub & rinse. All the unwanted buzz & tape hiss has finally been eliminated. This is also the only time that 'Nihl Corpus' has been made public in its original, un-dissected form, and the only appearance to date of parts 4 & 7. It's still clearly the work of someone struggling to find his creative bearings while manoeuvring around severe technical limitations, but I think it has some value regardless.

Although intended to be one continuous piece, I've divided the track up into its component sections to avoid the problems that can occur with long download times, and for a few other reasons as well (see the text on the 'Orgonosis #4' album page for more about this issue).

I have to convey my appreciation to De Anza's Electronic Music course instructor, Dan Mitchell, who gave me the latitude to get on with whatever I was getting on with.


PESTILENCE FROM THE LOINS OF JOY

One of the more unusual (and sonically indelicate) tracks from the 2nd stage of irr. app. (ext.) pre-history. This was one of the occasions where I impulsively put things together, and even the meagre compositional skills that I had developed at the time were shoved out of the way to let whatever was going to happen simply happen. I've always enjoyed listening to pieces created this way, because the results sounded completely alien to me despite having been involved in their creation (the most extreme example being a piece done slightly earlier than this one called 'The Carnival Of Disease'.

A small excerpt from this track was eventually integrated into the inversely-titled 'From Out Of The Loins Of Pestilence: Joy', which is on the third irr. album 'Their Little Bones...', released in 1999.

The only recording of the full-length original that I had managed to capture back in the day (on analogue cassette) was a real mess. That, and the fact that it's hard to imagine that anyone else would enjoy listening to it, made me think twice about making it public. But I couldn't resist the challenge of taking on the sound quality problems, and once I had done that it seemed silly not to do something with the stupid thing.

Dance music for victims of the emotional plague...

Another track excavated from the mid-period of the irr. app. (ext.) fossil record. The original purpose of this piece was to serve as the soundtrack for a 20-minute long theatrical performance (back in the day when I contemplated doing such things), the idea being that the sound would build very slowly in density and volume for 15 minutes until it ultimately reached a deafening peak that would completely drown out the actors' dialogue. This 5-minute section was intended for that finale 'overload'.

It was also my intention to attempt to create my own version of the 'audio saturation' achieved with some of the harsher tracks on early Organum releases -- but predictably fell well short of that standard, limited as I was at the time by the use of rudimentary sample loops, a primitive mixing set-up, and underdeveloped skills.

All tracks assembled & mixed at the De Anza Electronic Music, Cupertino, CA between 1992 and 1993. Digitally scrubbed at Rock Creek Tributary, Hillsboro, OR in March 2011.