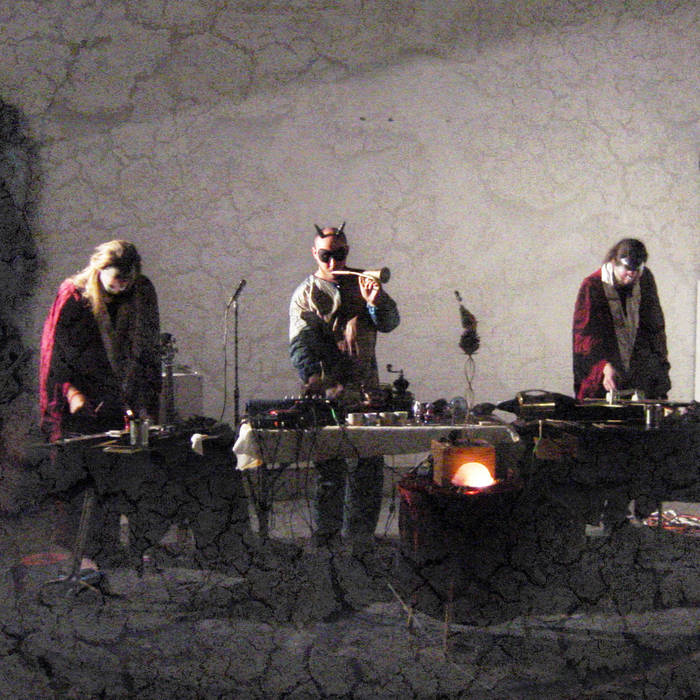 1. A Lullaby To Irritate The Half-Sleeping Heresiarch

4. Megatherium Gargling In The Primordial Swamp

In late February 2005 the tour van for the band Subtle skidded on a patch of black ice while driving between cities in the U.S. Midwest, and musician Dax Pierson sustained extremely serious injuries in the resulting accident. Dax had a large network of friends in the Bay Area music scene (including myself and the other individuals that were involved in the irr. app. (ext.) live band), and many of them rallied to help him meet the enormous financial burden created by his subsequent hospitalisation and treatment. Greg Scharpen and Jim Kaiser in particular made a significant effort, compiling the ‘Irreplaceable Hand’ benefit CD and helping to organise a benefit concert in June at Oakland’s Lobot Gallery, with sets by Soft Pink Truth, French Radio, Moe!kestra, Odd Nosdam, Barely Human Dance Theatre and irr. app. (ext.).

I was not very well-prepared to do another live show at the time, but this was obviously an irrelevant issue compared to the importance of the cause. A few weeks earlier Greg and I had done an irr. performance in Toronto with Recordists William Davison and Sherri Lyn Higgins, so we recycled the costumes used for that and I attempted to stitch together a set that re-worked some of the Toronto material into a trio format. This was a particularly unfocused period in irr. live activity: I had been having great difficulty finding a way to adapt the satisfying but unworkably paraphernalia-heavy approach of the first couple shows into something suitable to the average music venue, and my minimal practical performance experience (and my bandmates’ then nearly-nonexistent technical experience) put a severe limit on arrangement possibilities.

I’m definitely glad that I participated in this benefit, and I hope that the funds raised did some good for the worthy and much-loved Mr. Pierson. But this turned out to be one of the shows that most made me loathe the whole idea of live performance. The principal culprit on this occasion was a significant portion of the audience: the sprawling Moe!kestra was one of the first performances of the evening, so there was a large number of Bay Area avant-jazz/improv musicians in the room; once their set was finished, these repugnant snobs made a point of showing their contempt for all the other acts by hanging around and chattering loudly throughout the rest of the event. I don’t fault them for not being interested, but it would have been so easy for them to take their conversations outside, or simply to go elsewhere. You can hear this chatter in nearly every section of the recording -- even in the segments where the vocal microphones were not turned on. It was during this performance that I began to contemplate the idea of approaching the audience as an adversary that should be punished rather than entertained. Clearly, I was far too thin-skinned at the time.

As with other irr. shows of this period, I think the performance ends up working somewhat better as an audio document regardless of the loss of the absurd visual element. This show is essentially a series of odd, subtle textural settings -- almost an audio version of a Schwarzkogler photographic series -- and fortunately lacks the incontinent tooting and honking that marred many of the previous live performances. And although I complain about the lousy audience, I have to point out that there was a small group of very supportive people in attendance that deserve thanks: amongst them Jim Kaiser (who took the photos), Andy Way, and Drew Daniel (who provided his generous help during our set-up).

As with show #5, a few excerpts from this show were included on the ‘Aspiring To An Empty Gesture, Volume 1’ collection. A bit more scrub and polish has been applied since then, and (as was also the case with #5) a persistent electrical buzz that was audible throughout most of the show has finally been removed.


A LULLABY TO IRRITATE THE HALF-SLEEPING HERESIARCH

This was a mostly visually-oriented beginning, a nonsensical vignette that turned out to be completely inappropriate for the setting. Apologies for the rough quality of the introductory comments: they were only captured through accidental microphone bleed-through.

These recorded-narration segments typically fall flat in a live context, but I think they work rather nicely as recorded pieces. As with show #5, I more fully appreciate the results of the prepared guitar trio now than I did at the time -- although on this occasion it does obstruct the narration a bit too much in a couple places. I wish the three of us had had more opportunity to develop this kind of interaction. The speaker is our friend Lori Anne Chambers, who we met at a Current 93 show in France in 1996 only to discover that she lived quite close to us in California. In the late 90s I recorded her reading a few of my OAC texts and thought she did a wonderful job. I’ve yet to make fully adequate use of those recordings.

text:
It was either yesterday evening or a particularly dark afternoon when I found what I believed to be a carcass, engulfed in a swarm of tiny carrion flies while it reclined upon the spongy mass of neglect beneath the stump of a tree. As my phrasing has already implied, it turned out not to be a carcass at all: that is to say, it was not deceased, nor was it composed of living tissue. It was roughly human in shape but considerably smaller in scale, formed in equal measure out of what appeared to be unprocessed metal and a highly crystalline variety of stone. What attraction this held for the flies, I still could not say.

My first response upon stumbling across this perplexing scenario was a mild anxiety brought about by a conditioned sense of social responsibility. Was I obligated to take any action to either assist or remove such a thing? It soon became clear that it was not in any discomfort; it could even be described as perfectly content with its situation. This was a source of relief to me, and I happily abstained from offering it any sympathy.

My curiosity, however, was not so easily assuaged. I studied the small figure for some time. Perhaps because of the poor lighting -- or, even more likely, for reasons far more arcane -- I was never able to perceive clearly the surface texture of its various parts. Sometimes it appeared to be moist and pliable, and then it would shift and convey an equally strong impression of being unusually hard, possibly even brittle. Needless to say, I could never bring myself to actually touch it: this struck me as an unthinkable violation of both of our respective boundaries.

It was not long before the light degenerated to a point where the object of my scrutiny was described in only the vaguest of outlines, and I knew I was wasting my time -- quite likely, overstaying my welcome as well. I returned home and attempted to create a facsimile of the strange figure from memory, using whatever materials were at hand and seemed most appropriate. Within the hour, my ability to recall any details of my discovery had faded entirely, leaving me burdened with a crude, roughly-human-shaped relic of my own creation that filled me with an inexplicable dread, and bore absolutely no relation to the encounter from which it had been born.

The first version of this piece was performed at the New Works Gallery in Toronto. It was an amateurish attempt to throw something heavier and unexpected into the set, but I was never able to come up with a suitable arrangement (or an adequately heavy sound). This version was particularly emasculated by our crappy PA, which had to be kept at a pitifully inadequate volume in order to prevent it from constantly feeding back. Fortunately, with the recording I can turn everything up loud enough to more closely approximate what it should have sounded like. I still like the riff and am determined to find an adequate use for it someday. Absurdist doom-rock is a genre that still waits to be fully explored (although the Finnish band Circle have made some brilliant tracks that probably could be placed in that category).


MEGATHERIUM GARGLING IN THE PRIMORDIAL SWAMP

Another subtle textural piece, this one with some nice mechanical sources. I always tried to have some visible activity involved in the creation of sounds to avoid the boring spectacle that results from mere knob-twiddling and pre-recorded sources.

This idea was also first conceived for the Toronto show. Earlier in the year I had been looking through an ornithological field guide at Jim Haynes’ house and had discovered it contained long lists of transcribed birdsong; it immediately struck me how similar these transcriptions were to Kurt Schwitters’ ‘Ursonata’ and some of his other phonetic poems. I copied out the most interesting examples onto scrap paper, and while gathering materials in Toronto I found some nice handmade notebooks, transferred different extracts into each of them and painted bird icons onto the covers.

At this part of the performance we would pick up our notebooks, wander into the audience and do overlapping, Ursonata-eque recitations of the bird transcriptions that would increase in intensity until they became nothing but inarticulate howling; we would then throw the notebooks aside and converge on a pre-selected member of the audience (pre-selected by the band, but without the particular individual’s knowledge or consent). For this show the selected audient was Moe Staiano, who was seized in mid-chatter (grrr) with a lady-friend, carried to the stage-area, thrown into a chair and tied down with a long coil of text-inscribed rope, beaten with slabs of raw pork and then repeatedly shat upon. Well, ok -- there was not actually any pork or beatings or shatting involved: he was just tied to a chair, shouted at for a bit and then left there for the remainder of the set.

Unfortunately, in this direct-through-the-board recording the bird recitations are only subtly present beneath the backing field recording, but I’m sure they’re audible enough to give a general idea. Incidentally, the field recording used here is one of several I’ve made of the spectacular dawn chorus that takes place every spring morning in Cooloorta.

A peaceful conclusion to an awkward attempt. Here we all metaphorically climbed upon our pantomime horses and rode off into the sunset of a better world. The end.

Thanks to Jim Kaiser, Andy Way, Drew Daniel and all the little creatures that live in our eyebrows.