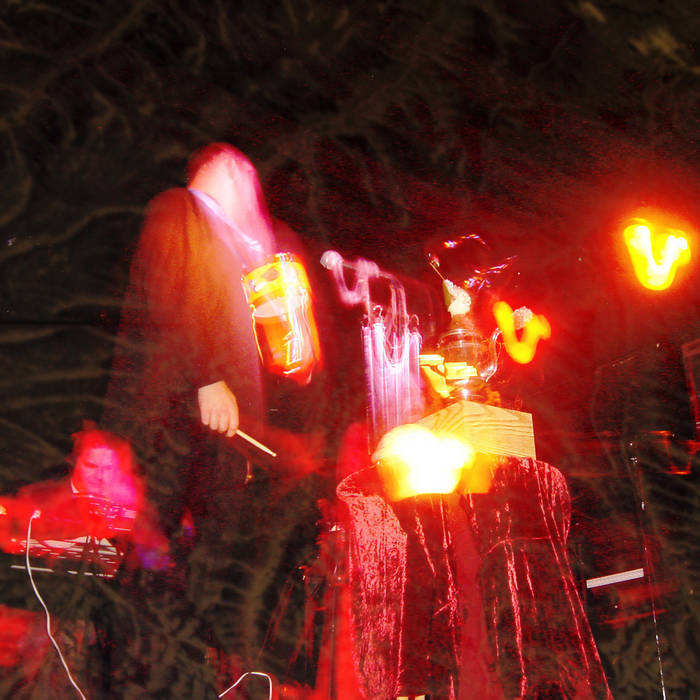 4. The Devious Mechanisations Of Gravity

6. The Cohoes Mastodon Is Sleeping

Towards the end of 2004, Cup & Dustin from I Am Spoonbender approached me (much to my surprise) about having irr. app. (ext.) involved in one of their 1.1.1 performances. They were planning on booking a small show in San Francisco and irr. was signed up as the opening act. We've remained friends since, so I don't believe they had too much cause to regret it.

I think the show works relatively well as an audio document (albeit a completely incomprehensible one), but as a live performance in front of a club audience it is probably a textbook example of how not to do things. Starting things off with R K Faulhaber's spellbinding introduction was good, but from there on my judgment went awry. So, 'How Not to Do a Club Performance 101':

1. Launch things off with some gentle snoring, just to make sure the kids are hoppin' straight out of the gate.

2. In case the snoring starts to lose the crowd, throw in a barrage of shrill, squeaky noises to make sure they're still in thrall.

3. Now, in order to really set the dance floor on fire, have a pre-recorded voice tell them a story. The story doesn't have to make sense, but it should be narrated by a sexy female voice (say, for example, Diana Rogerson's).

5. Go for the whole works now: buzzing, humming, incomprehensible voices and (naturally) more squeaking. Stop every once in a while and hit things in unison (more or less).

6. For the finale, let the crowd chill out with the tasty tones of some al dente guitar noodles. Throw out a damn death dedication. Now get comfortable: the applause will last for days.

A couple small snippets from this show (the introduction and some of part two) were integrated into the album 'Aspiring To An Empty Gesture, Vol. 1', but the bulk of it has never been made public before. A very prominent electrical buzz had prevented most of the recording from being usable, but now, thanks to the miracle of digital technology, that fault has been (mostly) corrected.

Richard Faulhaber's introductions were the one part of irr. performances with which I was always very pleased. This particular one, doing the 'Freaks' introduction in his William Burroughs voice, is still probably the best. You can hear Spoonbender Dustin Donaldson, who picked up on the routine immediately, responding from the audience.

This is the only time I attempted to create the manipulated turntable effect I'd developed for 'Narcoinvitatorintraphasieschatological Music Box' (from the 'Dust Pincher Appliances' CD) in a live context. In both live and studio instances I used the empty grooves on the flipside of the David Jackman EP 'Sol Mara' to keep the needle occupied.

I don't think I recognised it at the time (it's usually not easy to hear exactly what is going on during a performance), but John & Greg did a great job with their contribution to the prepared guitar trio in this section.

Diana Rogerson’s spoken contribution was recorded in Cooloorta in April 2002 (during the same session where she read ‘The Famine Road’ texts).

text:
The spleen-curdling horror of what had been undertaken on that day is something I would not be inclined to describe with accuracy -- even were the powers of language to do so not handicapped (as they are) by my meagre facility to put them to use after such an experience. This, certainly not for the first time.

The aftermath of the ordeal, however, proved to be entirely worthwhile: for, in my distress, I let the still-muddy handful of carrots fall where they would and fled in the only direction that seemed to offer any hope of security: that is, down into the perfumed bowels of the earth itself.

My progress at first was guided only by the desire for escape; but, some few hours later when my arms were growing tired, I began to gain an appreciation for my position and for the journey I was undertaking. I realised that all around me the earth must be teeming with life that sighted eyes had never been set upon before, each engaged in subterranean rituals of which the sun would remain forever ignorant. And somewhere farther below me was the secret heart of the world itself, pulsing and seething in the enormity of its volcanic ardour. My efforts guided now by enthusiasm rather than fear, I managed to double my rate of progress as I wormed deeper into the yielding clay.

After 3 weeks of burrowing into the compressed mass of the world, I had been long expecting that any moment I would find myself arriving into the embrace of its molten core. To my dismay, I instead emerged -- blinking and dumbfounded -- into the unforgiving glare of the afternoon sun. My expectations crashed headlong into the truth of my situation like a near-sighted Pomeranian running into a glass door. The air was literally humming in my ears.

I reclined, still half-buried, upon the moss-splattered soil, while my vision wandered aimlessly in and out of focus. Vague, undulating shapes converged in the sky above my head; I could only stare in helpless fascination as they performed an endless series of bizarre aerial gyrations across the width and breadth of my vision. That these manifestations were fully cognisant of my presence -- and, most likely, my circumstances as well -- was gradually made apparent to me; their ceaseless acrobatics all but demanded that I remained motionless, and in this I was only too happy to oblige. In the end I must have fallen asleep with my mouth open, for I woke to find the gyrations now taking place in the pit of my stomach, and the burnt-sugar aftertaste of the forms' passage in that direction lingering upon my tongue.

A storm of some magnitude was taking place outside while I sat, and the windows would occasionally light up from the flashes of atmospheric electricity that sought to indulge their craving for all things conductive. The walls and the ceiling would groan beneath the onslaught of the wind, or rustle from the impact of countless drops of water that had been careless enough to be caught in the devious mechanisations of gravity. The floor creaked from time to time under the pressure of an unseen foot. I did my best not to allow any of these things to distract me from my efforts; and, although I have no means by which I can prove it, I feel that I was at least moderately successful.


THE DEVIOUS MECHANISATIONS OF GRAVITY

There's no better way to keep regular than a good, old-fashioned public drone.

It's a shame about the technical problems that interfere with this section; I've done my best to minimise them, but a few moments are still hobbled.

Incidentally, that garbled voice in the background was not captured from shortwave, or through any radio receiver at all: it was something that was somehow picked up by my turntable one evening when I was still living in Felton.


THE COHOES MASTODON IS SLEEPING

A spontaneous paean to a particular member of Mammut Americanum, uncovered during mill construction near the Cohoes Falls in 1866 and now perpetually dozing at the New York State Museum. The end.

Thanks to Robynn Iwata, Dustin Donaldson and Jim Haynes, and all the best freaks that were there.