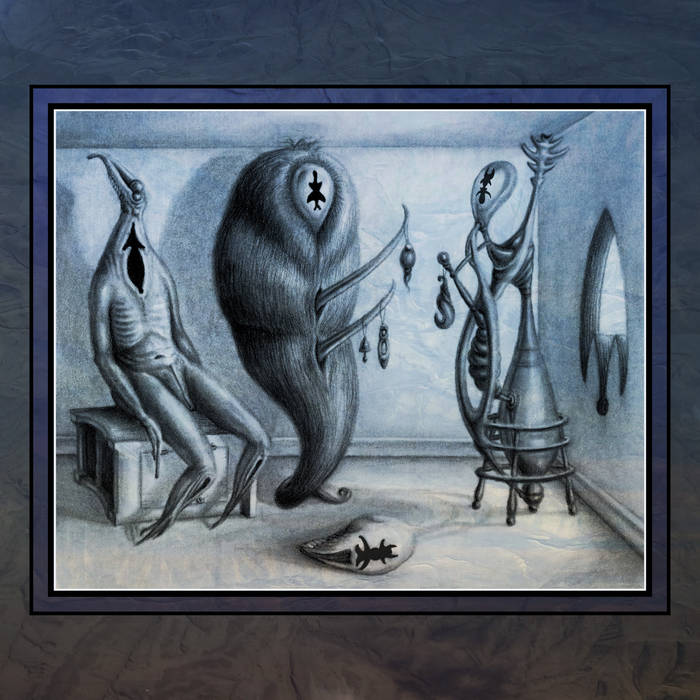 Although I remembered that this track existed, it wasn’t until I was poking around the archive materials for ‘Radiant Black Future’ that I fully recalled its contents and the extent of the plans I had for it. ‘’Patapheromone’ wasn’t going to be the name of the track, however, it was a name I’d come up with for a side-project that was going to focus on long-form (30-50 minute), slowly evolving pieces. I hadn’t yet worked that way as irr. app. (ext.) – that would start in 2001 with ‘Ozeanische Gefühle’ – so I guess I felt I needed to create a different context to reflect the different approach.

This particular piece was supposed to be the first volume in what I had conceived as a continuing CD series, packaged in a hand-made box that would be similar to the one already developed for ‘Their Little Bones’. An ambitious part of the project was the idea to enlist a different artist to create a 12-page booklet for each album. The first three contributors I hoped to get were Steve Stapleton, Jim Woodring, and Christoph Heemann; it was a reasonably plausible list as well, as I’d been in contact with all three of them for a while, and had already received tentative approval from Steve and Jim. For this first installment, though, I think I was going to do the art myself, in order to have a completed version to clearly demonstrate to the others how it would all come together.

Like so many of my plans back then, it just kind of fizzled out from lack of time and resources. I don’t think I was entirely confident in the track, either... but I definitely liked bits of it, and that was why it ended up being dismantled and recycled into other things. Some parts fit in well with my starting materials for ‘Die Unsterblichkeit Ist Nicht Jedermanns Sache’, several sections migrated into ‘Auslöschen Der Unnötigen Lichter’, and the whole thing ended with Richard Faulhaber’s voice abstraction experiment that is now ‘The Blackbird’s Final Words’ – all from the ‘Radiant Black Future’ album. Some subtle, atmospheric bits were integrated into the ‘Ozeanische Gefühle’ album. A fair number of the elements have never been used elsewhere.

I can’t help but kick myself for letting this project idea slide. Listening to the track now, I think it’s actually rather good, and the packaging concept had a lot of potential to be a beautiful thing. On first examination, I thought I might edit out the sections that were used elsewhere and include the remaining 20-minute sequence as a bonus track for the ‘Radiant Black Future’ reissue; I’ve decided instead to release it in full, as I think the flow of the whole piece works best intact.

Revision and reconstruction at Rock Creek Tributary, Hillsboro OR in late June/early July 2020.