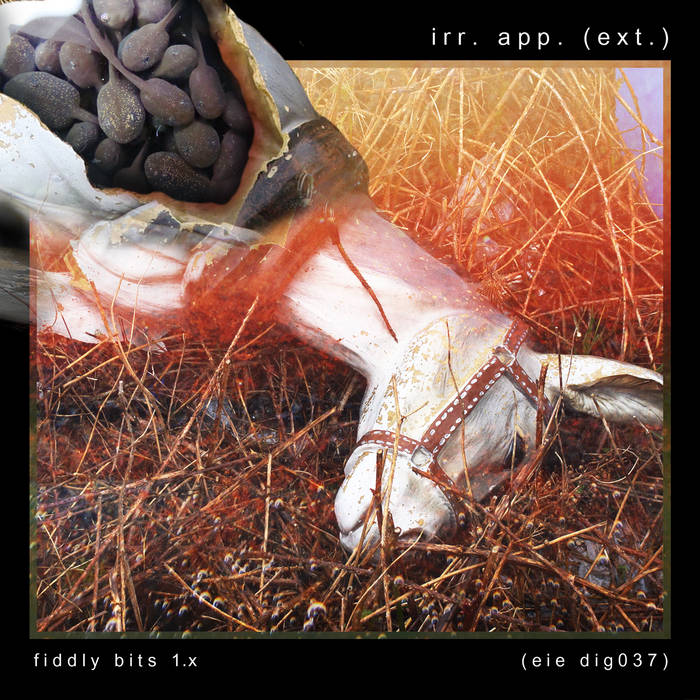 3. Vague Is The Colour Of My True Love's Hair, Yet Her Teeth Are Still Made Of Fossilised Caterpillars {2014}

7. The Three Least Objectionable Of The Eight Crepuscular Utterances Of The Saaamaaa Ritual {2014}

11. An Incident Of Remorseless Skullduggery In The Bouncy Castle Of Iniquity {2003/2019}

‘Fiddly Bits’ versions 1, 1.1 & 1.2 were rarities collections occasionally sent out as a free thank-you to people who had made substantial purchases of my digital download albums. When any of the included tracks were used on a proper release they would be swapped out for something else, which is the reason for the different versions. Only two tracks from those previous collections remain on this version.

Tracks 1, 9 & 20 were solidified out of improvisations; 1 & 20 were momentarily posted to the irr. Soundcloud account, while the basis of track 9 was used in the 2016 track ‘Threnody For 13,000’. Track 20 was inspired by visits to Andrew & Melon Liles in Yorkshire and is dedicated to them, even though it is very unlikely that they enjoy listening to this awful kind of thing.

Track 2 is constructed out of extracts from the first eight non-performances, which were enacted between May 1995 and August 1997 in Nevers, New York City, Conwy, Wathamstow, San Jose, Felton and Portland. Non-performances were a series of spontaneous audio actions generally directed towards an unaware or uninterested audience — most often some variety of domestic animal. John Scharpen participated in the thumpy tootly Portland bit towards the end of the track.

Shorter versions of tracks 3, 7 and 12 were used as hypothetical in-studio performances by a fictional, absurdist simulacrum of Thomas Carnacki in ‘Imaginary Re-Enactment Of A Thwarted Thomas Carnacki Appearance On WFMU, 2014-November- 18’ which has been lingering around the irr Mixcloud page.

Tracks 4 & 10 were created by request of Brainwashed Radio.

Tracks 5 & 8 were submitted to Andrew Liles as raw material for his ‘Vortex Vault’ series, released across 12 volumes by Beta-Lactam Ring Records in 2007.

Track 6 is an alternate version of the track ‘I Felt It Approaching From A Distance, But I Didn’t Hear It Leave’ released in 2014.

Track 11 is built on an experiment with bungee cords recorded in 2003; the original source was also used as the coda for the 2004 track ‘Unexpected Company’, which has yet to be released publicly. I think it might have been used somewhere else as well, but I can’t remember where.

Tracks 13-19 were created as a speculative soundtrack outline for a documentary film project a friend of mine was planning to make back in 2007 about her old car, a Plymouth Valiant, which she had lived in for a time and which was about to be delivered to the junkyard. I never saw any of the film footage, but she asked me to put together some audio material for it so I recorded every possible sound I could extract from the interior, exterior and vicinity of the car and assembled these seven tracks. As far as I am aware, the film has never been completed. I don’t know what title was intended for the project: I’ve chosen ‘Valiant Vagrant’ as a reference both to the car and to my attempt to make a soundtrack for a film I’d never seen.

All tracks twiddled, voluptufied and remastered at Rock Creek Tributary, Hillsboro, OR in December 2019.