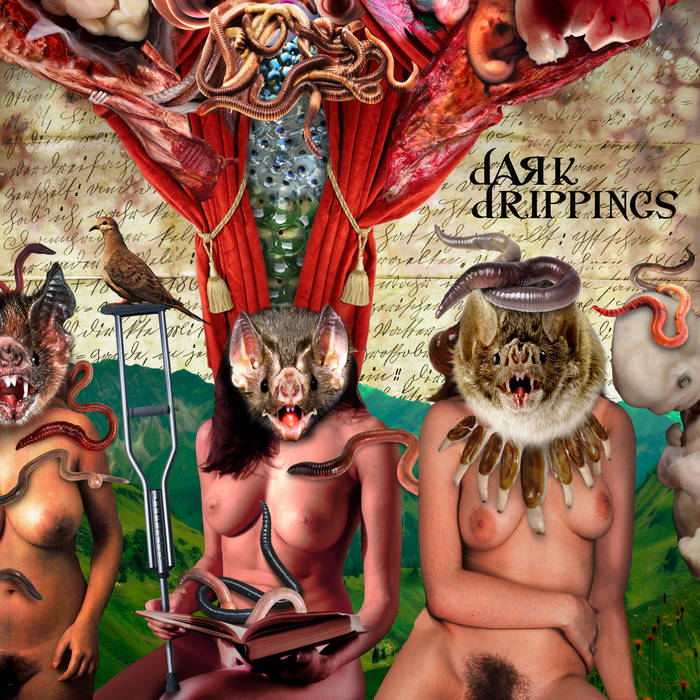 i: wound great companion to NWW's dark fat. at times even weirder! thanks, matt, for putting this up here on my personal request!

AMALGAMATED WONDERS OF THE WORLD

3. The Way The Moon Eats The Clouds

6. Drunked With The Old Man Of The Mountain

9. I Am The Poison-ish [rehearsal]

11. A Subsidence In Possibilities Precipitated By The Peroration Of A South-Facing Markhor

'Dark Drippings' was originally released as a limited edition of hand-numbered CDrs in August 2016, and sold out soon afterwards. The album contains 13 tracks: #s 1-8 are available for preview above, and #s 9-13 are included as bonus tracks with the album download.

This is a collection of raw sources, outtakes and alternate versions from the Nurse With Wound ‘Dark Fat’ double CD. The project underwent several significant changes over the course of a year-and-a-half: first being intended as part of a box set, and then a single disc on its own, and then a single disc with a limited bonus disc of outtakes, and finally a fully-realised double disc set.

Around half of the material contained here represents that initial ‘outtake’ version of the second disc, minus those sections that carried over to the released version. In keeping with the original guiding concept behind it, the additional content is either: 1) an unmodified extract of the live recordings that were altered & layered to create the tracks on ‘Dark Fat’ (such as track 5, which is an excerpt of the Scribble Seven performance at St. Peter’s Arts Centre in 2006), 2) an alternate source with distinct audio character (such as track 10, which is the direct-from-the-board version of an extract from the 2008 London Fields Lido ‘swimming pool’ concert, rather than the underwater recording used on ‘DF’), or 3) an outtake from one of the concerts that I felt was unique, or at least unusual, but would never fit in anywhere except a bits-and-bobs collection like this (such as my stirring interpretation of ‘The Old Man Of The Mountain’ on track 6, taken from our second appearance at the AvantGarde Festival in 2009, and which was the only of the three attempted performances of the song that wasn’t completely awful).

As with ‘Dark Fat’ itself, piquant moments from soundchecks and wacky extracts from NWW’s solitary attempt at a reheasal (just prior to the show at Koko in 2011) have been liberally sprinkled throughout. Two tracks I’d created for the Nine Day Antler Society using NWW soundcheck sources (’A Subsidence In Possibilities Precipitated By The Peroration Of A South-Facing Markhor’ {July 2014} and ‘1959, The Observatory’ {November 2014}) have also been included. --msw