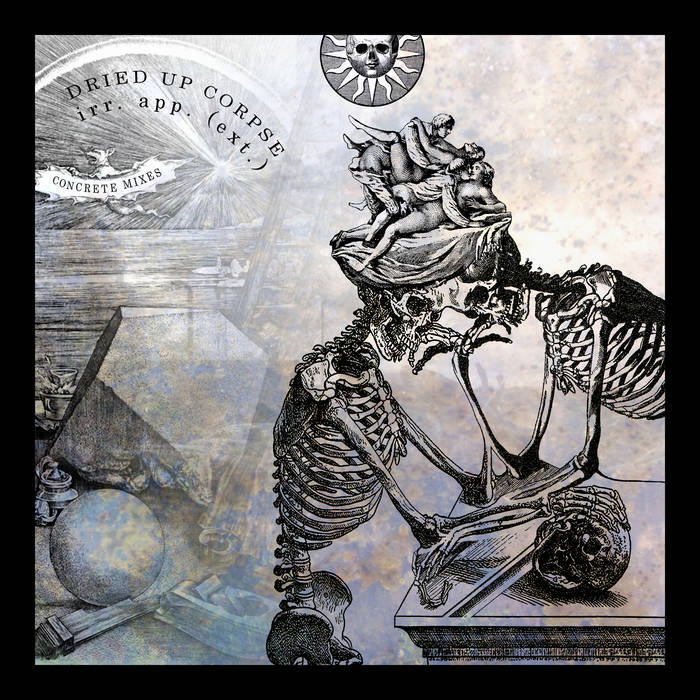 In one of the semi-regular packages of new releases sent to me by my friends in Blue Sabbath Black Cheer, I discovered a 7 inch record that had a bit more weight to it than would usually be expected. It turned out to be one of their anti-records: a slab of record-shaped concrete appropriately titled ‘Musique Concrète / Rock N’ Roll’ released under the name of their alter-ego Dried Up Corpse. It did not take much imagination to come up with the idea of trying to play the record, and within a day or so I started formulating ways that this could be done.

My first approach (used mainly in the ‘dance mix’ track) was to go about it acoustically. The record does actually fit on a turntable, so I pulled out a battered old second-hand model that I keep around to use for things (like this) that I wouldn’t want to inflict on my good player. I positioned a microphone at the edge of the record to capture the sounds and tried a variety of objects as substitute ‘needles’: a razor blade, a jaw harp, a drumstick, a ticket stub from the Portland Aquarium, one of those spring bumpers that keep a door from hitting the wall, etc. The second approach (used mainly in the ‘extended dub mix’ track) was to try to get the turntable itself to ‘read’ the record in its usual way. Obviously a regular needle wouldn’t last very long on a ragged piece of concrete, so I tightly attached an 1/8” to 1/4” stereo lead adapter right next to the needle and used it as an intermediary to transfer the surface vibrations. A few passes also involved other objects that were interposed to alter the quality of the sounds. The outcomes of the different approaches were then layered together to create both tracks.

The results are pretty obvious, but it’s fun to screw around with ideas like this from time to time just to see what will happen. I originally intended this to be a ‘2-copy limited edition digital 7 inch’ just given to Stan and Wm of BSBC, but, since the thing would otherwise just be sitting on a shelf in my computer collecting digital dust, I decided I might as well make it public for the few people that have an interest in this kind of thing.

MF DOOM is given his flowers, plus appearances from MC Jada Imani and Stanley Ipkuss