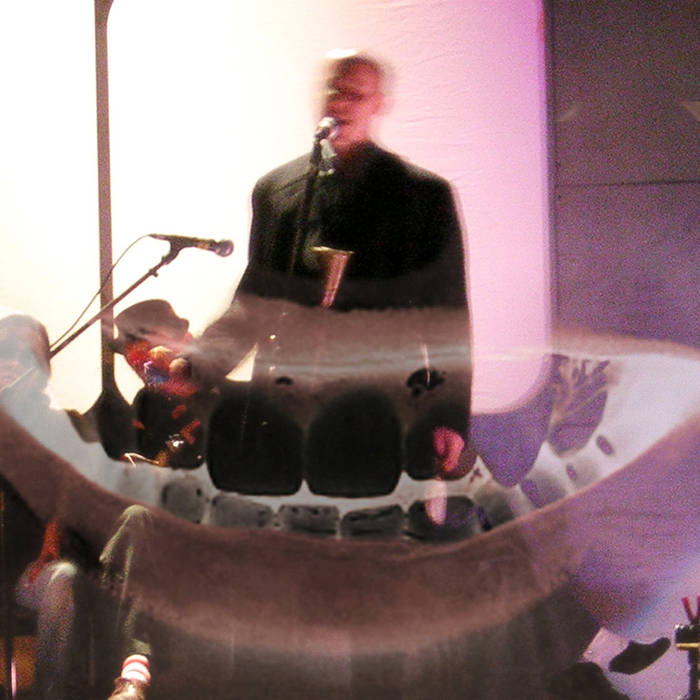 This EP collects studio and live versions of two tracks that have a related trajectory: 'Black Teeth' and 'Lurcher'. The former was created to be my first publicly-performed 'proper' song and unexpectedly turned into a Nurse With Wound track; the second was created to be a Nurse With Wound track but ended up being my second publicly-performed 'proper' song. Both live versions were performed as part of Faun Fables events.

When the band Faun Fables was arranging a pair of theatrically-oriented events for the 'home base' performances of their 2006 tour for 'The Transit Rider' album, they invited some of their local friends and colleagues to perform their own material as part of a kind of opening variety show. I was one of those invited to contribute and, although I'd never attempted to do a straightforward song in public before (my material usually being of a more abstract nature) I decided to give the singer-songwriter role a try. The suggested theme for the contributors was, of course, riding public transit, and being someone who has never owned a car, I had a wealth of personal experience upon which to draw.

The lyrics of the song I ultimately came up with were all derived from experiences with mad people, sometimes on trains but more usually at bus stops or on city buses, and phrases like 'Give me Easter Bunny!' and 'Pick up your cross for Jesus, asshole!' are from genuine conversations -- not so much 'with', but directed 'at' me. The whole ending section describing an argument between a bus passenger and a squeaky-voiced 'Satan' is essentially transcribed word-for-word, including the squeaky-voice aspect itself. How I wish I had a recording device with me when that particular exchange took place...

Later in the year, Steve Stapleton and Andrew Liles heard this recording and suggested that we use the song as part of Nurse With Wound's live set. Anyone who has heard the subsequent NWW versions will notice that this original attempt has gaps inserted between some of the verses: this was entirely because, in my first-timer's nervousness, I was afraid I might forget the words if I didn't have more time to think about what came next. Unfortunately, this means the piece is drawn out MUCH too long. The Faun Fables audience turned out to be incredibly supportive regardless, and this is easily the most enthusiastic response I've ever had to one of my own performances. If it had gone the other way, it's very likely I would have given up any idea of singing in public and that aspect of NWW's live show would never have come about (which I know would have suited the preferences of at least a few Nurse fans).

An edited version of this track -- in which my incredibly poor attempt at throat-singing in the middle was removed -- was briefly posted on the irr. My Space page, but this is the first time the full performance with introduction and shameful bits has been made available. The announcer, for those who aren't familiar with his distinctive voice, is the redoubtable Nils Frykdahl of Faun Fables/Sleepytime Gorilla Museum/Idiot Flesh fame.

‘Black Teeth’ ended up working well in the Nurse With Wound live set, providing a nicely contrasting interlude to the abstract, improvised pieces that made up the bulk of the performances. As Steve was wrapping up work on ‘Huffin’ Rag Blues’ in 2008, he approached me about recording a studio version of the song, as he thought it would be a good fit with the somewhat song-oriented nature of the other tracks on the album. I had already recorded the backing rhythm for use in the live shows, so it was simply a matter of laying down some vocals tracks and a bit of bugle honking, and then handing everything over so the Stapleton & Liles vaudeville team could add their brilliant twists and hiccups.

This is a stripped-down version using just the voice and rhythm tracks: not as compelling as the full NWW studio arrangement, but perhaps it will be interesting to a few people out there who like their listening material raw, dirty and covered in warts.

lyrics:
Another year ending in a bloodless haze
Jumbled up ashes in an unmarked grave
Little green apples, tobacco road:
It's all the same

Begging crumbs from a cracker just to waste my breath
Finding blinders on a dumbshit who's selectively deaf
Bunch of wasted motherfuckers sipping whisky in the gutter
Loafing round the toaster with no bread an too much butter:
It's all the same

Makin whoopee under the Boardwalk at Santa Cruz
With a body that's got no name
Makin whoopee on the promenade at Coney Island
Three thousand miles away
Red bricks in Boston, Black teeth in a jar:
It's all the same

Trading insults with the dogs on the sunless strip
Passing pearls to a stranger with a cloven lip
Little green apples, bloated bodies on the bayou
Gonna make that trip

Try to score some purple at the donkey-end of 1967
Shooting horses in the alley where the saints convene
On the wrong side of the kingdom of heaven
Passed out on the subway, cranked up on the L
Pukin up my liver on the express train to hell:
It's all the same

At the onset of a new series of live performances with Nurse With Wound in 2008, I decided it was probably time to retire the song 'Black Teeth', which had been included in the mostly free-form sets we had been doing since 2006. So I set about creating a replacement song, using the details of my periodic visits to Steve Stapleton's home in the Irish countryside as lyrical fodder. The title of this new song, 'Lurcher', is a reference to the unusual type of one of Steve's many dogs, a beautiful greyhound mix whose name was Size.

After finishing the words, I put together a basic demo -- just metronome, electric bass and voice -- and sent it off to the other Nurses for approval. In the end, Steve decided not to use the song: primarily, I think, because the words, although essentially abstract, had too much to do with him personally. Instead, 'Black Teeth' was briefly replaced with the Rodgers & Hart song 'You Took Advantage Of Me' (based on the June Christy performance); that choice proved to be a bit too ambitious for my vocal skills, however, and after 2 attempts it was scrapped in favour of a far more appropriate selection: the Mills Brothers classic 'The Old Man Of The Mountain'.

It has been my intention to do a proper, fully-orchestrated recording of 'Lurcher' at some point, but I've yet to get around to it. I think the demo version has some charm to it, so I've included it here -- although tarted up a bit and with a few bells and whistles added to flesh out the completely stripped-down version submitted for approval three years ago.

In an odd bit of symmetry, the song that I had created to replace ‘Black Teeth’ ended up being used to serve the same purpose for which ‘Black Teeth’ was originally created. In October 2011, Dawn McCarthy was organising another of her intimate events and once again invited me to be part of the group of friends who were to perform before the main Faun Fables set, the general theme of the evening being ‘storytelling’. I didn’t have enough time to come up with anything new, but of course I did already have ‘Lurcher’ -- which fit the theme well enough and had yet to be performed in public.

As always with Dawn’s audiences, the crowd turned out to be incredibly supportive and even provided me with a great backing rhythm so I could keep my focus on remembering the words (which I hadn’t sung since recording the demo three years earlier). I got a bunch of them muddled up anyway, but I was enjoying myself so much it didn’t really matter. This is just a room mic recording so it’s somewhat rough-sounding, but it made sense to add it to this collection. The spoken introduction is particularly rough since I had to boost the volume so much to make it audible; because of this, and also because it’s a couple minutes long, I decided to make it separate track so people can easily chose to discard it. The introductions for the event were once again provided by Nils Frykdahl.

The spoken introduction audio quality is particularly rough since I had to boost the volume so much to make it audible; because of this, and also because it’s a couple minutes long, I decided to make it separate track so people can easily chose to skip it or discard it.

lyrics:
Dismembered rubber cosmonaut
Sprawled underneath a curdled sky
Grafted to an orchid and the skull of a goat
And waiting to be scattered by the turlock tide.

And the congested mass of the atmosphere
Oozes through the Merzbild membrane
Greasing the receivers, sending sparks down the wires
With friendly silver tendrils of electrical fire
Electrical Fire!

And the piss-bearded beast that once wandered free
Is just a pile of ash and blackened bones and teeth
He lost his ground to the hoarders of dirt and meat
Who carve it into shapes to fit their worthless schemes
The rubber cosmonaut has fallen from his seat
And his domain is being siphoned away into memory
Into memory...

'Black Teeth' live version recorded at the Oakland Metro, Oakland CA on 26-May-2006. Thanks to either John or Greg Scharpen (I've forgotten which) for holding the microphone when my turn arrived. Performance photo taken by Greg Scharpen (but using MY camera).

'Black Teeth [2001 strip]' drum track recorded in 2007 and vocal track in 2008 at the Felton Empire Studio, Felton CA. This mix created in October 2011 at Rock Creek Tributary, Hillsboro OR.