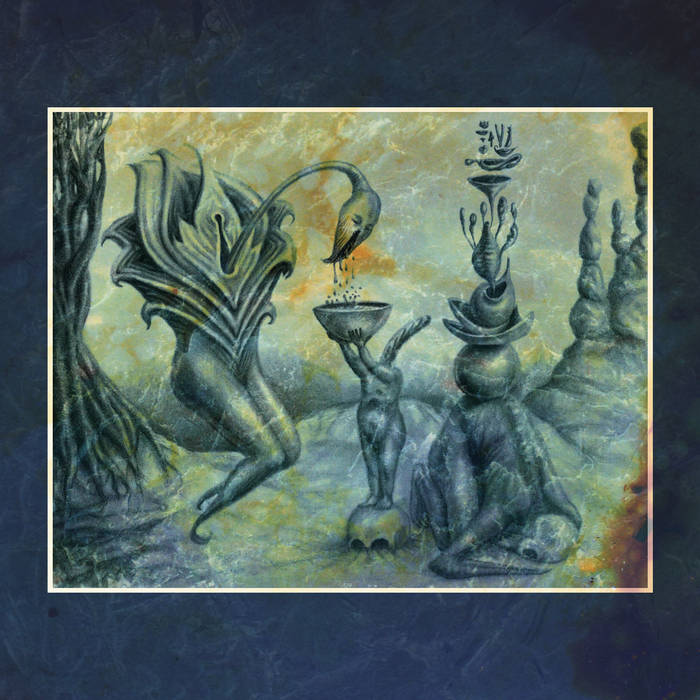 Back in 2001, Steve Stapleton & I outlined an idea for the first proper collaboration between us. The plan was for me to use his sources to create half of an album, while he would use my sources to create the other half. During my second visit to his home at Cooloorta in April 2001 he gave me piles of Nurse With Wound outtake material (mostly from the 'Awkward Pause' sessions) to take home with me; I'd also made several cassettes worth of Cooloorta location recordings that I intended to use as additional sources. As soon as I was back home again, I put together a couple CDRs worth of my own recordings and sent them off to Steve.

Over the next 6 months or so I put together 4 tracks -- about 35 minutes worth of material -- using the NWW sources, the Cooloorta field recordings and some newly-recorded additions. Since he doesn't have any recording equipment at home (it doesn't hold up very well to the damp weather and lightning strikes common to his part of the Irish countryside) Steve had to postpone working on his half until he could wrap up his pending commitments and then find an opportunity to schedule some more studio time.

The months slipped by and other projects came up that needed Steve's full attention: the 2002 retrospective of his artwork at the Horse Hospital, then obligations surrounding the 'She & Me' album, etc, etc. Our first completed collaboration turned out to be volume 3 of the 'Angry Eelectric Finger' series released in 2004 (not counting the 'Chance Meeting of a Defective Tape Machine and Migraine' CD, which was entirely accidental), and not long after that I was enlisted into live activity with Nurse in 2005, which kept us both fairly busy for the next 5 years... and these 4 orphaned children disappeared into the more poorly-lit crevices of memory.

It wasn't until I was settling into a new home in 2010 that the tracks came to my attention again. On listening to them after so much time had passed, I was surprised at how much I enjoyed them (my memory of completed work typically consisting of little more than the aspects with which I was dissatisfied). To my dismay, the finished mixes were all I could find: the individual sources and the multitrack files had completely vanished -- and there were a lot of technical shortcomings I was keen to correct, given the limitations of my skills and equipment back in 2001 and the fact that some of the sources came from hissy analog cassettes.

Still, it seemed a shame to leave these pieces forever unheard by anyone else, and they immediately came to mind when I began considering what to include on this site. Fortunately, during 2009 & 2010 I developed a lot of useful tricks while cleaning up old NWW cassette-only sources (the multitrack sources to which had also vanished over the years) for parts of the 'Flawed Existence' collection and other yet-to-be released projects, and so I have been able to fix most of the problems and give the tracks a good scrubbing using only the available finished mixes.

I contacted Steve first to make sure he had no objections about making the tracks available in this way... and he had virtually no memory of them. It did serve to stir up the idea once again of a full-length Nurse With Wound/irr. app. (ext.) collaboration, however, and hopefully something of the kind will materialise before the faculty of memory fails us both for good.

'Fasciation' is a term I learned during my early visits to Cooloorta, where Steve Stapleton has cultivated one of the most impressive cacti gardens I've ever seen. It becomes even more impressive in context, as the perpetually sodden & chilly Irish countryside is one of the last places you'd expect to find a thriving collection of plants from the desert. The term refers to the beautiful sculptural irregularities that cacti frequently develop.

This track is built upon the sound of my throat-singing into an enormous metal kettle, which at the time was the only source of hot water in the Cooloorta caravan. The odd-sounding percussion was created using those big plastic water-cooler bottles, with different extracts then looped and overlapped.

The title of this track came from a fascinating nugget of information given to me by Mr. Stapelton during one of my first visits to Cooloorta, concerning the British eccentric William Barnes and his effort to remove Latin and other non-English derivations from the English language. Barnes published two books about 'speech-craft' during the late 1800's outlining how this might be accomplished, and included lists of worth-evennings to a wide variety of Latin-based words. 'Pitches of suchness' was his replacement thing-name for the notion of comparison. How to convince the public to adapt this new speech-lore, however, was doubtless a great two-horned rede-ship for the man. Anyhow, the idea was intriguing enough to warrant thing-nameness for this particular piece of sound-culling.

The original title I intended to use was 'On The Famine Road', since many of the field recordings in the background were in fact recorded on the Famine Road. That title (or close enough) was later moved over to the track I made for Diana Rogerson (included somewhere else on this site) since it used her reading of a text piece I had written that was given the same title. The spoken piece was also originally going to be used in this track, but I changed my mind for reasons I can't remember anymore.

A little bit of a Nurse With Wound track I've always loved -- 'Charlie Hosts A Pork-Pie Parasite' -- which was released on the obscure cassette compilation 'Zamizdat Trade Journal 4' in 1985 (and recently re-released as part of the 'Flawed Existence' box set) is insinuated into the middle of the track.

NO BEARD, NO BALLS, NO FACE

I was determined to use this particular phrase as a track title the first time I heard it. Back when all three of his boys were still young kids, Steve Stapleton used to engage in some marathon roughhousing matches with them; they were free to have at him without holding back, with these three important exceptions.

This track uses some extracts from the 'Chance Meeting Of A Defective Tape Machine And A Migraine' recording, which had yet to be released on its own at the time. 'Migrane' was a kind of remix of Nurse With Wound's original 'Chance Meeting' album that came about accidentally when I was listening to it on my old cassette walkman, and the failing mechanism started playing both sides of the tape at the same time (one of them, of course, in reverse) at a constantly oscillating speed.

Rat-Size (or sometimes 'Hat-Size' or simply 'Size') was one of my favourites of the ever-changing Cooloorta menagerie: a beautiful dog of the 'Lurcher' category (in this case looking very similar to a greyhound) who loved to chase cars and made peculiar noises when her belly was scratched. Sadly, she joined the hound pack of eternity a few years back. This piece was created before that happened, but it's now become a kind of commemoration to her. Her contented belly-scratching grunts can be heard during the first section. Excerpts from a 'behind-the-scenes' recording I made surreptitiously at Petr Vastl's home studio during sessions for the Nurse With Wound track 'Hindu Monastery Breakfast' pop up here and there.

A more deliberate tribute to Size is the song 'Lurcher', a demo version of which is included elsewhere on this site. A photo of her (with conical headdress, even) can be seen in the graphic for that song.